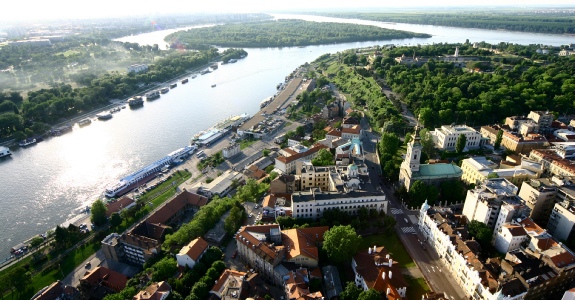 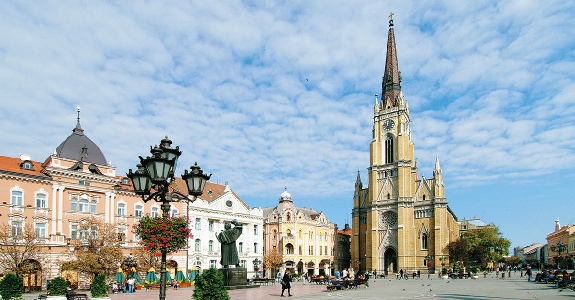 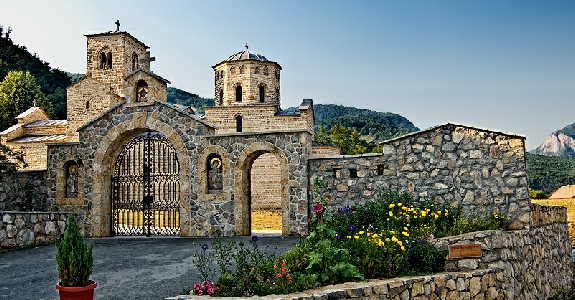 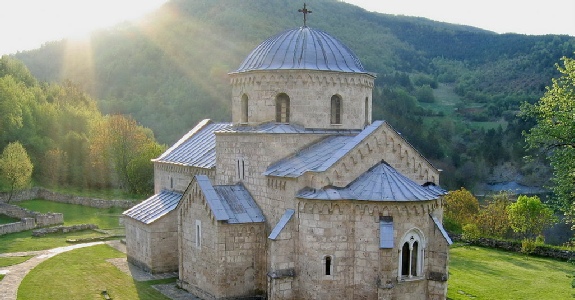 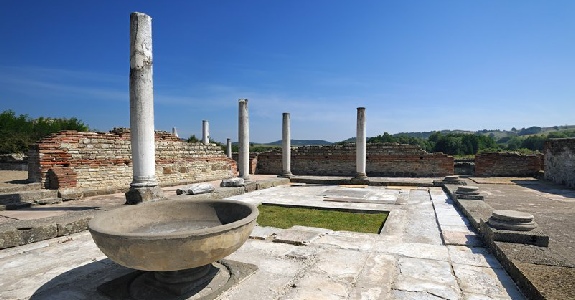 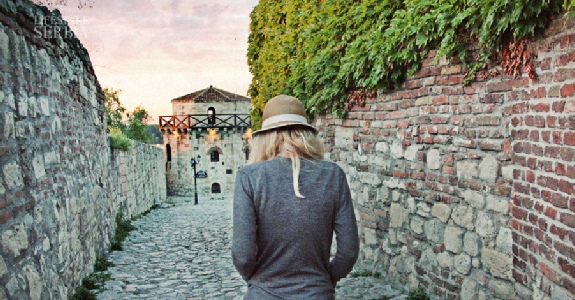 From the bustling city centers of Belgrade and Novi Sad, to the gently sloping valleys of the central Šumadija region, to the banks of the mighty Danube, Serbia offers some of the very best cultural travel experiences in Central and Eastern Europe. Discover cultural remnants of the Roman era, explore the hideways of long-ago Emperors, and wander through exquisite Romanesque-Byzantine monasteries.

Departure to northern part of the country called Vojvodina. Visit Krusedol and Grgetek Monasteries settled on Fruska Gora Mountain. Proceed to the little charming town named Sremski Karlovci where we will see Patriarchy Residence, the most monumental building from the 19th century in Vojvodina region, which represents the seat of the Orthodox bishop of Srem; The Seminary, boarding school for the pupils of The Theological School built in 1903; Orthodox Cathedral, baroque church dedicated to St. Nicolas; Catholic Church dedicated to the Holy Trinity; Karlovci Grammar School, the oldest Serbian high school, founded in 1791; Fountain ’’The Four Lions’’ built in 1799 in honour of finishing the first public system of water supply in the town; The Chapel of Peace, the site where the famous Karlovci Peace Treaty was signed in year 1699.; Town Hall, two-storied building from the beginning of the 19th century. After great historical story we will proceed to the ``Zivanovic`` winery to taste some great domestic Serbian wines. In return, visit to the ``Zekin Salas`` - old Serbian farmhouse where we will have dinner and tasting of domestic brandy - ``rakija``. Return to hotel in Belgrade.

Departure to city of Topola, residential city of Serbian medieval ruler`s dynasty – Karadjordjevic, and the place where modern Serbian state was found. During our visit, we will see Church of St. George situated on the peak of Oplenac hill, a white marbled five-domed mausoleum of the Karadjordjevic dynasty, decorated with impressive mosaics in 15 000 nuances, depicting biblical scenes copied from medieval frescoes from more than 70 Serbian Orthodox Monasteries. Furthermore, within the King Peter`s endowment, we will see also Peter`s House which is now a museum with numerous personal things, relics, crowns and portraits of royal dynasty Karadjordjevic; The Queen`s Villa where Queen Maria were staying most the time; The King`s Villa; Orchard keeper`s house built in 1911. After great stories heard by professional tourist guide, take the way for lunch in the restaurant. Departure forward to city of Kragujevac, which once was the capital of Serbia. There we will visit Amidza Residence that was a part of a huge Prince Milos Obrenovic`s Court; Kragujevac October Memorial Park - the most difficult day in the history of Kragujevac, was 21 of October 1941, when several thousands of Kragujevac people were executed, among them several hundreds of high school pupils taken directly from the school. Because of its tragic destiny, Kragujevac is one of the most active fighters for the piece. It was awarded “Currier of piece” recognition by UN and “Medal of piece” by the French City of Verden. Proceed to Kraljevo city. Overnight.

Vicinity of Kraljevo is full of great medieval monasteries. First of all, we will visit Zica Monastery from 13.... century. Great significance that this monastery has is that the first Serbian archbishop St.Sava established the seat of Serbian Church here in 1219. Next Monastery important for Serbian history is Studenica Monastery, the endowment of Grand Prince Stefan Nemanja, founder of the independent Serbian state and of a dynasty which would rule Serbia for a full two centuries. It is listed to the UNESCO world heritage list since 1986. Proceed further to Monastery Gradac, lovely small monastery where friendly sisters will welcome each passenger with a cup of coffee and a chat. After visit, we will departure forward and visit also Petrova Church and Djurdjevi Stupovi Monastery. Transfer to the hotel in Novi Pazar.

On the day 5 we will take the way to so called ``Devil`s Town``, one of the most attractive natural phenomena in the world. It is a place of strange forms with a strange name, a complex of stone-capped, spindle-shaped pillars in science referred to as soil pyramids. It consists of 220 soil figures created by soil erosion. It got its name ``Devil`s Town`` by a legend which you`ll get to know during visit. Arrival in Prolom Spa, where you definitely will replenish your energy in hotel`s wellness center for rest of the journey. Prolom Spa is considered a health resort not just for its mineral waters but its climate too. It has several thermal mineral water springs (ranging in temperature from 26 to 31.5°C), which are lightly mineralized and highly alkaline.

Saint Sava Temple is the largest Orthodox temple in the Balkans. It was built in the Serbo-Byzantine style and including the cross on top of the dome, it is 82 meters high. The temple is still under construction, although major works ended in 2004. The construction of the church lasted more than planed because of wars, poverty and partly because of communist rule. Church is so big that can seat more than 10,000 people at the same time.

Perched high above Topola on Oplenac Hill, the Karadjordjevic family mausoleum and St. George Church (Oplenac Church) complex is one of the most historic sites in this part of Sumadija (Šumadija). The church features five spectacular domes and a white marble exterior. There are 725 compositions and 1,500 figures crafter from 40 million mosaic tiles in 15,000 shades. Explore further and you will find the tombs of Karadjordje and King Peter the First (1903-1921) in the central part of the church.

Different from the most of Serbian monasteries that were built in difficultly accessible regions, Žiča is placed in fertile plain, only 6 km from Kraljevo towards Mataruška Banja. It is a foundation of king Stefan the First-Crowned (1195–1223) and one of the most important holy objects of the Serbian people. The construction of the main monastery church of Holy Ascension began around 1206, and had been finished before 1217, when its founder got the king’s crown from Rome.

In southern Serbia, 27 kilometers (17 miles) south-east of the town of Kursumlija, lies a world-class natural landmark – Đavolja Varoš or ”Devil’s Town”. Here, you will find two rare natural phenomena: Two hundred and two erosion generated stone formations measuring between 2 and 15 meters (6.5 and 49 feet) in height, with a diameter of under 1 meter (3 feet), topped by stone blocks weighing as much as 100 kilograms (220 pounds).

The first known record of Golubac fortress dates back to 1335 when it was mentioned as Hungarian military fortification although it is not known when precisely it was built or who built it. Byzantines used it to fortify its northern borders; Hungarians to protect its estates across the Danube; Serbs to guard its territory from Hungarian invasions…

Due to exceptional geostrategic location, over centuries, many times it was a target of various conquerors and battlefield of different armies. 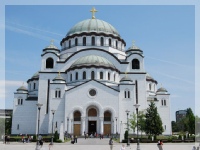 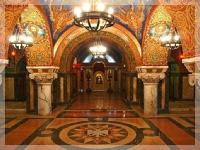 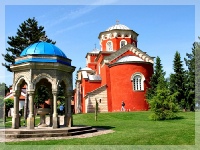 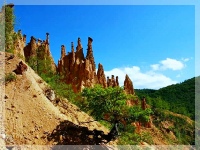 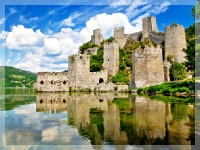