General facts: Republic of Macedonia is a country located in a central part of Balkan peninsula in Southwestern Europe with total area of 25, 333 square kilometres and total population over two million people. Macedonia is bordered  with Serbia to the north, Greece to the south, Bulgaria on the east and Albania on the west. It is one of the Yugoslav successor states, from which it declared independence in 1991. It became a member of the United Nations in 1993 but, as a result of a dispute with Greece over its name, it was admitted under the provisional reference of the former Yugoslav Republic of Macedonia, sometimes abbreviated as FYROM.  The capital city is Skopje, with 506,926 inhabitants according to the 2002 census. The other bigger cities are: Bitola, Tetovo, Kumanovo, Ohrid, Prilep, Gostivar, Veles, Kavadarci. The official language is Macedonian which belongs to the South Slavic language group, but the second larger ethnic group of Albanian speak with Albanian language which is also official  (25.2%). Macedonia has a good road infrastructure, and also has two international airports, one in Skopje and another in Ohrid. Skopje International airport receives airlines from many world destinations and it is the country's premier airport. Official religions are: Macedonian Orthodox 64.7%, Muslim 33.3%, other Christian 0.37%, other and unspecified 1.63%. Macedonia is a member of the UN and the Council of Europe. Since December 2005 it has also been a candidate for joining the European Union and has applied for NATO membership.

Climate: Macedonia is situated in the middle of Balkan Peninsula, and in the major part of country is continental climate, but with influences of both Mediterranean and mountain climate. This is the country with big oscillation in temperatures, with very cold winters and hot summers. In the parts where there are mountain climate, during winters, temperatures often goes below 15 degrees Celsius, and during the summers, temperatures exceeding 40 degrees Celsius. Still, the humidity contributes to bearable temperatures, and soft climate. Macedonia is a land of water: on a yearly level, it rains 500 mm to the east, up to 1.700 mm to the west of the country.

Nature: Macedonia is dominantly mountainous country but it is constantly under the influence of a climate from the Black Sea to the East, the Aegean Sea to the South and Ionian Sea to the West. It has a lot of peaks over 2000 meters. Special pearls of Macedonian nature are lakes. One of the most famous is Ohrid lake. It is one of the oldest and deepest lakes in Europe, where is preserved unique aquatic ecosystem with more than two hundred endemic species. In 1979. it was put in UNESCO World Heritage List.

History: over the territory of today's Macedonia alternated many conquerors and nations and it goes deep in a past, but still modern Republic of Macedonia is very young state. On 8th of September 1991, Macedonians held a referendum on independence. Seventy-four percent voted in favor and in January 1992 the country declared its full independence from the former Yugoslavia. Macedonian leader Kiro Gligorov artfully negotiated the only peaceful withdrawal of the Yugoslav army from any of the former republics.

Cuisine: Macedonians are a nation that really enjoy the food.  Macedonian cuisine has much diversities inside itself and influences of cuisine such as Turkish, Greek, Italian, Hungarian… Famous for its rich Šopska salad, an appetizer and side dish which accompanies almost every meal, Macedonian cuisine is also noted for the diversity and quality of its dairy products, wines, and local alcoholic beverages, such as rakija. Tavche Gravche (special made beans) and mastika are considered the national dish and drink of the Republic of Macedonia.

Interesting facts: Since becoming an independent nation in 1991, Macedonia has had two flags. Both its first flag and the current flag feature a yellow sun on a red background. The first version, pictured left, was based on a symbol found on ancient tombstones discovered in 1977 in the town of Vergina. However, Vergina is in Greek Macedonia and Greece decided to claim that they owned the copyright to use the symbol. They even went as far as blocking trade with the Republic of Macedonia and forced the UN headquarters in New York to take down the Macedonian flag. As a compromise, and to restart trading with their Greek neighbors, Macedonia changed its flag to its current one from 1995. 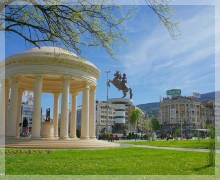 Skopje is among Europe's most entertaining and eclectic small capital cities. With plenty of history, and with its modern, buzzy  nightlife. 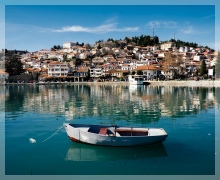 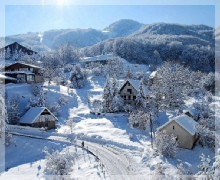 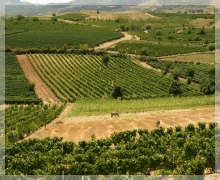 Macedonia's winery heartland, Tikveš, has produced wine since the 4th century BC. It features rolling vineyards, lakes, caves and mountains.

Want to book hotel in Macedonia yourself ? You can do that on special prices, using our hotel reservation system.