Surrounded by mountains that make up part of the Dinaric Alps, and its heart and mix of Ottoman and Hapsburg cultures, the picturesque city of Sarajevo stakes its place as one of the finest cities in Europe. With its stunning natural setting, culturally diverse history, and modern vibrancy, Sarajevo is a city that will satisfy the desires of everyone from the rugged outdoors person to the cultured vulture. 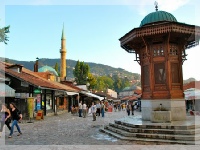 The city of Sarajevo is divided into four municipalities, however, it is Stari Grad (the Old Town) that is undoubtedly the city’s crown jewel. The eastern section of Stari Grad is quite aptly home to the 15th-century Ottoman quarters.

Wandering among the atmospheric alleyways of the Bascarsija, you will be transported to another time and place by the sight of its splendid architecture, the sound of the muezzin from the Gazi Husrey-Beg Mosque and the smell of freshly cooked ćevapčići.

If you’re feeling fit enough, climb up the hill to the old medieval town and the ruins of Jacje Castle, where you can gain great views over the city. Walking west along the main alleyway of Bascarsija, you will notice the architecture change as you move into Ferhadija Street and into the Austro-Hungarian influenced part of the city. 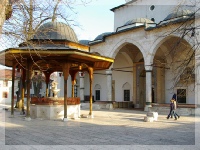 Ferhadija St is the main pedestrian shopping street in Sarajevo. The streets running parallel to Ferhadija Street are Obala Kulina bana and Marsala Tita, where you will find many fine examples of the Austro-Hungarian legacy. 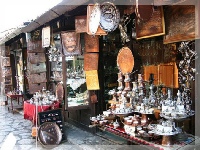 Sarajevo has everything to offer the discerning shopaholic – be it traditional craftwork, the latest high street fashions, or simply markets in which to meander. Whatever your shopping needs, be sure to leave room in your luggage for the gifts you’ll undoubtedly take home.

If you’re looking for handcrafted gifts, markets or antiquities then make a beeline for the Bascarsija area. Among its myriad of winding alleys and wooden shop fronts you’ll find an array of beautifully crafted goods at amazing prices. Specific crafts are located together, so if you want a nice piece of gold jewellery, then Gazi-Husrev Bey Street will cater to your needs, while in Kazandziluk Street, you’ll be able to find that copper Turkish coffee set you've always wanted.

7 MUST SEE SIGHTS IN SARAJEVO

Want to book hotel in Sarajevo yourself? You can do that on special prices, using our hotel reservation system.