General facts: Romania is country in central and southeastern part of Europe, and it is the eight country in European Union by its size, and seventh by its population with over 18 million inhabitants. Romania extends on 238,391 square kilometers, and it shares borders with Serbia and Hungary on the west, Ukraine and Moldova on the northeast and east, and with Bulgaria on the south. The capital city is Bucharest, and according to census from 2002. it had over one million and nine thousand inhabitants, which makes nine percent of total population. Official language is Romanian. The name Romania, and its derivatives, come from the Latin word 'Romanus', a legacy of Roman rulers who took control of ancient Dacia in 106 A.D. Romanian retains a number of features of old Latin and also contains many words taken from the surrounding Slavic languages, as well as from French, Old Church Slavonic, German, Greek and Turkish.

Climate: There are significant regional differences of the climate between different parts of Romania. Ranges between hot summers and very cold winters with lots of snow from the middle of December until the end of March. Romania's average annual temperature is 11C in the south and on the coast, 2C in the mountains. In June, July and August, the hottest places in Romania are near the Black Sea coast, where average temperatures reach 24-30C. In summer, there are frequent showers and thunderstorms in the mountains. The mild, sunny days of autumn linger from early September until late October. Spring starts in the middle of March in most of Romania's regions, April in the mountains and in the north part of the country.

Nature: Romania's territory features splendid mountains, beautiful hills, fertile plains and a lot of rivers and lakes. The Carpathian Mountains traverse the center of the country bordered on both sides by foothills and finally the great plains of the outer rim. Forests cover over one quarter of the country and the fauna is one of the richest in Europe including bears, deer, lynx, chamois and wolves. The legendary Danube River ends its eight-country journey at the Black Sea, after forming one of the largest and most bio diverse wetlands in the world, the Danube Delta. Although not as high as the Alps, the Carpathian Mountains extend over 600 miles in Romania, in the shape of an arch. They are divided into three major ranges: the Eastern Carpathians, the Southern Carpathians (also known as the Transylvanian Alps), and the Western Carpathians. Each of these ranges feature a variety of landscapes, due to the different types of terrain. Romania’s mountains are a great destination for numerous outdoor activities including: climbing, hiking, biking and river-rafting. Some of the most popular ski resorts are Poiana Brasov, Sinaia, Predeal, Vatra Dornei, Lake Balea and Paltinis.

History: Romania's history has not been as idyllically peaceful as its geography. Over the centuries, various nations invaded Romania. Romania's historical provinces Wallachia and Moldova offered furious resistance to the invading Ottoman Turks. Transylvania was successively under Habsburg, Ottoman, Hungarian or Wallachian rule, while remaining an (semi) autonomous province.

Romania's post WWII history as a communist - block nation is more widely known, primarily due to the excesses of the former dictator Nicolae Ceausescu. In December 1989 a national uprising led to his overthrow. The 1991 Constitution established Romania as a republic with a multiparty system, market economy and individual rights of free speech, religion and private ownership. Today, Romania is a member of European Union.

Cuisine: Like most of the cuisines on Balkan, Romanian cuisine has a lot of varieties inside itself. It is a cuisine influenced by repeated waves of different cultures: the ancient Greeks, with whom Romanians traded; the Romans, who gave the country its name; the Saxons, who settled in southern Transylvania; the Turks, who were on these territories during centuries; as well as Slavic and Magyar neighbors. The main ingredients used by Romanian chefs are meats such as pork, beef and lamb, fish, vegetables, dairy products and fruit.

Seashore: The Romanian Black sea is 245 km long and it is situated between Chilia Danube branch in the north and Vama Veche in the south. The northern zone is a low shore with large beaches up to 500 meters, bounded with some littoral lakes. This coastal area is protected as a part of the Danube Delta Biosphere Reservation. The south part of seashore has a variable height littoral cliff, which are broken at places by the backwaters, separated by sandy beaches of variable width (from 20 meters up to 300 meters).

Interesting facts: One of the famous novels and movies characters is Count Dracula - the Vampire – who was created by an Irish writer, Bram Stoker in 1897. Historic character of Dracula, Vlad III Dracula, lived in 15. century in Wallachia - Romania. At one meeting, Stoker became interested in the stories and legends about Dracula any after that and took it as a model for a character in that novel. 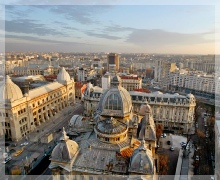 Much of Romania slags it and Europe in general doesn’t always speak favourably of Romania’s capital. They’re all wrong. 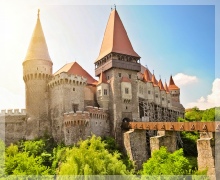 So much is in Transylvania – it’s no surprise that it’s often the only part of Romania experienced and visited by tourists. 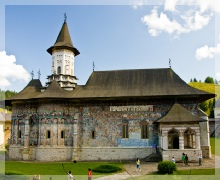 Fortified monasteries and churches throughout Bucovina, many of which have survived centuries of war and enjoy Unesco World Heritage status.

Romania’s third-largest city is also one of the country's most attractive urban areas, built around a series of beautiful public squares.

Want to book hotel in Romania yourself? You can do that on special prices, using our hotel reservation system.