General facts: Montenegro is small but extremely beautiful country located at the southern Europe, and it belongs to central Mediterranean. It has total are of 13.812 km². To the north it borders Serbia, to the southeast Kosovo and Albania, to the south it is separated from Italy by the Adriatic Sea and to the west it borders Croatia and Bosnia and Herzegovina. Montenegro has population of 620 thousand inhabitants. The capital city is Podgorica, which is the largest city in country, and royal capital is city of Cetinje – historical and cultural center. The official language is Montenegrin, and it was declared by official at 2007. By then, the Serbian language was main, and today it is non-official, next to Albanian, Bosnian and Croatian. The idea of a Montenegrin standard language separate from Serbian appeared in 1990s and gained traction in 2000s via proponents of Montenegrin independence. There are four national parks: Skadar lake, Durmitor and Lovcen mountains and Biogradska gora. Adriatic coastline is 293 kilometer long.

Climate: Montenegro, for its size, has of quite amazing diversity on climate. The influence of sea and the mountainous landscape together on a small area gave Montenegro various kinds of different "climates" with noticeable difference. There are three climate zones in Montenegro: the coastal zone, the continental zone and the mountain zone.

Nature: So small country but so many beauties. You cannot find anywhere in Europe but in Montenegro. You will find a sea with beautiful beaches, rivers with unique canyons, clear lakes and giant mountains. One of them is Durmitor, a magnificent mountain that has numerous glacier lakes. Another Lovcen mountain - protector of tradition and pride of Montenegro, which has so many viewpoints from where You can see the beautiful coastline of Montenegro, and Croatia too. The silence of Skadar Lake, the biggest lake in the Balkans is disturbed only by the gentle flight of the birds, as there is an abundance of them there. In the very south of Montenegro, the Bojana river and the Adriatic Sea have created one of the most beautiful beaches on the Montenegrin coast - the Big Beach. It is 13 kilometers long and characterized by very fine sand. The Kotor bay is included among 20 most beautiful bays in the world. It is called as “bride of Adriatic sea”.  The Biogradska Gora has so many untouched nature. The peaks which are 2000 meters high, six glacial lakes, and five of them are at an altitude of 1,820 meters, thick forests, steams with transparent water, green pastures … The deepest canyon in Europe is also located in Montenegro. It is canyon of Tara river. In 1991. Montenegro was declared for ecological state.

History: Todays Montenegro was historically called Duklja and Zeta, and none of the other states in the Balkans has so many influences in their political, religious or cultural identity from the east (Byzantine, Islam, Russia, Serbia) and from the west (Rome, Venice, Vienna).

The modern Montenegro is officially young state, in May 2006, Montenegro held a referendum on independence, which narrowly passed. On June 3rd, it declared independence, and on June 26, it became the 192nd  member of the United Nations.

Cuisine: Montenegrin cuisine is a result of Montenegro's long history. It is a variation of Mediterranean and Oriental cuisines. The most influence is from Italy, Turkey, Greece, and as well from Hungary. Montenegrin cuisine also varies geographically; the cuisine in the coastal area differs from the one in the northern highland region. The coastal area is traditionally a representative of Mediterranean cuisine, with seafood being a common dish, while the northern represents more the Oriental.

Interesting fact: Montenegro has always been a problem for cartographers as it is almost impossible to write all the letters of its name into the small space it takes up on the map. 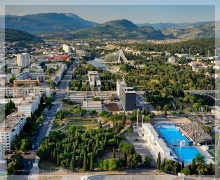 Podgorica (pronounced ‘pod·go·ri·tsa’) is a pleasant little city with lots of green space and some excellent galleries and bars. 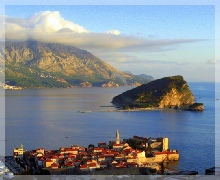 The poster child of Montenegrin tourism, Budva – with its atmospheric Stari Grad (Old Town) and numerous beaches – certainly has a lot to offer. 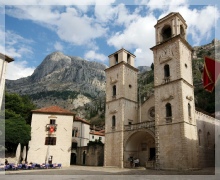 Wedged between brooding mountains and a moody corner of the bay, this dramatically beautiful town is perfectly at one with its setting. 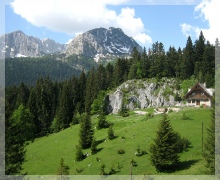 Magnificent scenery ratchets up to stupendous in this national park, where ice and water have carved a dramatic landscape from the limestone.

Want to book hotel in Montenegro yourself ? You can do that on special prices, using our hotel reservation system.