General facts: Greece is known since ancient times as Hellas, and it is a country in Southeast Europe. According to the 2011 census, Greece's population is around 11 million. Athens is the nation's capital and largest city, with its urban area including Piraeus. Greece is strategically located at the crossroads of Europe, Asia, the Middle East, and Africa, and shares land borders with Albania to the northwest, with Former Yugoslav Republic of Macedonia and Bulgaria to the north and Turkey to the northeast. The country consists of nine geographic regions: Macedonia, Central Greece, the Peloponnese, Thessaly, Epirus, the Aegean Islands (including the Dodecanese and Cyclades), Thrace, Crete, and the Ionian Islands. The Aegean Sea lies to the east of the mainland, the Ionian Sea to the west, and the Mediterranean Sea to the south. Greece has the 11th longest coastline in the world at 13,676 km in length, featuring a vast number of islands (approximately 1,400, of which 227 are inhabited). Eighty percent of Greece consists of mountains, of which Mount Olympus is the highest, at 2,917 m.The official language is Greek, spoken by 99% of pupulation. According to statistics, almost 97% of Greek citizens identify themselves as Ortodox Cristians, belonging to Greek Ortodox church.

History: Modern Greece traces its roots to the civilization of Ancient Greece, considered the cradle of Western civilization. As such it is the birthplace of democracy, Western philosophy, the Olympic Games, Western literature and historiography, political science, major scientific and mathematical principles, and Western drama, including both tragedy and comedy. This legacy is partly reflected in the 17 UNESCO World Heritage Sites located in Greece, ranking it 7th in Europe and 13th in the world. The modern Greek state, was established in 1830, following the Greek War of Independence from the Ottoman Empire. Today, Greece is democratoc country, a member of United Nations, and a member of European Union since 1981.

Nature: Greece is located in south-eastern Europe, on the southern end of the Balkan Peninsula (Haemus peninsula); it lies at the meeting point of three continents – Europe, Asia and Africa. Greece borders to the North on Bulgaria and the Former Yugoslav Republic of Macedonia (F.Y.R.O.M.), to the Northwest on Albania, to the Northeast on Turkey; to the West it is washed by the Ionian Sea; to the South by the Mediterranean Sea and to the East by the Aegean Sea. The total area of Greece is 131,957 km2 and consists of three main geographic areas: a peninsular mainland (that extends from the region of Central Greece on the South to the region of Thrace on the North) being the biggest geographic feature of the country; the Peloponnese peninsula that is separated from the mainland by the canal of the Corinth Isthmus, and around 6.000 islands and islets, scattered in the Aegean and Ionian Sea, most of them grouped in clusters, that constitute the unique Greek archipelago. Crete, Rhodes, Corfu, the Dodecanese and the Cyclades are some of the famous and popular islands and island clusters in Greece. Eighty percent of the country consists of mountains or hills, making Greece one of the most mountainous countries of Europe; furthermore, it has 16.000 kilometres of coastline of which 7500 are found around the thousands islands of the Greek archipelago, a truly unparalleled phenomenon on the European continent.

Cuisine: One of the authentic cultural elements of a region is gastronomy. The distinctiveness of the “kitchen taste” is many times associated with the quality characteristics of its society, while “revealing” information concerning its cultural and economical history. In Greek nutritional tradition the gustative result blends harmonically with the high nutritional value. Dozens of scientific studies have shown the positive effect of a balanced Greek diet on a person’s health, beauty and longevity. In addition, the nutritional culture of the Greeks has traditionally added an extraverted social dimension to the table, combining gustative satisfaction with recreation and communication, and thus maintaining even today some overtones from ancient feasts. In contrast to what many people believe about Greek cuisine, you will discoverer that “moussaka”, “souvlaki” and “choriatiki” (Greek salad) are not the only worthwhile Greek dishes. Greek cuisine consists of a large variety of dishes that can fully satisfy the gastronomic quests of both vegetarians and meat lovers. Greek cuisine has four secrets: good quality fresh ingredients, correct use of flavourings (herbs) and spices, the famous Greek olive oil and simplicity.

Climate: Greece has a Mediterranean climate with plenty of sunshine, mild temperatures and a limited amount of rainfall. Due to the country's geographical position, its rugged relief and its distribution between the mainland and the sea, there is great variation in Greece's climate. In summer, the dry hot days are cooled by seasonal winds called the meltemi, while mountainous regions have generally lower temperatures. The winters are mild in lowland areas, with a minimum amount of snow and ice, yet, mountains are usually snow-covered. Moreover, a common phenomenon is the occurrence of different climactic conditions during the same season (for instance, mild heat in coastal areas and cool temperatures in mountainous regions).

Interesting fact: Greek has been spoken for more than 3,000 years, making it one of the oldest languages in Europe. Thousands of English words come from the Greek language, sometimes via the Roman adaptation into Latin and then to English. Common English words from Greek include “academy,” “apology,” “marathon,” “siren,” “alphabet,” and “typhoon. 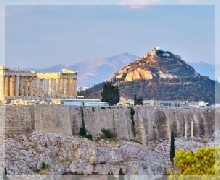 The magnificent Acropolis, crowned by the iconic Parthenon temple, rises above the city, watching the sprawling modern metropolis evolve. 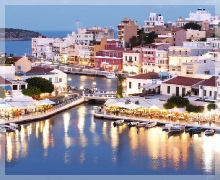 Crete is more like a small country than another Greek island. It’s not just Greece’s largest island, but arguably its most fascinating and diverse. 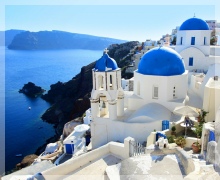 The Cyclades, are Greek islands to dream about; sun-kissed outliers of rock and dappled earth lying scattered across the glittering Aegean Sea. 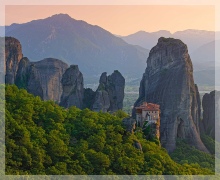 The mountains and alpine meadows around Elati are destinations for outdoor enthusiasts, with the lofty monastery-capped rock..

Want to book hotel in Greece yourself ? You can do that on special prices, using our hotel reservation system.