General facts: Republic of Albania is European country that lies at western part of Balkan peninsula. It borders Montenegro on the northwest, Serbia at northeast, Macedonia to the east and Greece to the south and southeast. Albania has a coast to Adriatic and Ionian sea. Strait of Ortrant separate Albania from the coast of Italy. It has total area of 28.748 Km2, and population over 3,5 million people. Tirana is the capital and largest city of coutry with more than 700 thousand inhabitants and it is cultural and industrial center. The major confesion in Albania is Muslim, while there are also people with Cristian backgrounds, Ortodox and Catholic. The official language is Albanian. Albanian is an Indo-European language with a 36-letter alphabet; like the country itself it is one of a kind. There are distant links with Romanian, and many words are on loan from Turkish, Greek and Slavic languages.

Nature: Much of Albania’s surface is mountainous – the average height above sea level is 708 m, (2,336 ft) and its highest peak, Mount Korabi on the Macedonian border, is 2.753 m (9,085 ft). Most of the population lives in the south-central lowlands and on the coastal plain. The country has many rivers which originate in the high mountains and pass through steep gorges before reaching the plain and making their way to the sea. Most of the main rivers have been extensively managed, usually to generate hydro-electricity. Albania has nearly 450 km (280 mi) of seacoast, with the Adriatic running from the Montenegrin border south to the Bay of Vlora, where the Ionian Sea begins. The Ionian Cost is very rugged with rocky coves along the narrow coastal strip and steep mountains rising almost straight up almost much of its length. The highest point along this stretch is at the Llogara Pass, over 1.000m (3,300ft) high. Geologic activity and erosion have created many caves at the base of these cliffs, some of which were inhabited in prehistoric times.

On the other hand, the Adriatic coast is a low-lying one, with large protected bays (such as those of Vlora and Durrës), which have been used as harbors since ancient times. The rivers that flow into the Adriatic have created fertile alluvial plains on these lowlands and, at their mouths, exceptionally rich wetlands, which are home to many waterfowl and migratory birds. The most significant lakes are Ohrid,  Shkodra and Prespa lake. The Ohrid and Prespa lakes are between two and foir million years old, and some unique species of fish are there. Over a third of territory is forested and the country is very rich in flora.

Climate: Albania mostly has Mediterranean climate, especially along the Ionian and Adriatic sea. In the inner part of country and on the higher parts, there is continental climate and temperature sometimes goes under freezing, but mostly during the nights. During the summers, temperature goes over 40 °C, especially in inland town such as Tirana. On the coastlines is more comfortable, because the sea breezes keep the average temperatures between 25 and 30 °C. The country has more than 300 sunny days each year. Most annual rainfalls happens between late autumn and early spring. Rain during the summer is vary unusual.

History: The territories of present –day Albania have been inhabited as early back as 100.000 years ago. It was at the turn of the third millennium BC that an Indo - European population settled there. After its fall in the year 30 B.C. Illyrian came under the control of Roman Empire. With the division of the Roman Empire (395 A.D), Illyrian became a part of the Byzantine Empire. During the long history, Albania was occupied by the Ottoman empire, Musolini forces, and then by Hitler army. The resistance against foreign invasion was known as the Anti – Fascist National Liberation front. The Communist party took power in November 1944, when the foreign armies were expelled. Shortly thereafter, a totalitarian regime was established under the communist leader Enver Hoxha. For about 50 years, the regime applied the policy of self-isolation, leaving the country in great economic poverty when it finally emerged from isolation in 1991. After this period democratic party led country to a whole new period where they are trying to intergrate country into European community and the alliance of NATO forces.

Cuisine: Albanian cuisine offers a truly unique blend of Mediterranean flavors. Fertile climate, nearness to the sea and influences of neighboring countries have had a huge impact on diversity of Albanian cuisine. Variety of dishes was taken from Byzantine, Venetian, Arabs. There are also many inluences of Yougoslav cuisine. The basic components of almost all dishes are vegetables and meat. Albanian cuisine is characterized by the use of Mediterranean herbs such as oregano, black pepper, mint, basil, rosemary and more in cooking meat and fish.

Interesting fact: One of the most common gesticulation confusions arises from the fact that Albanians nod their heads up and down to mean "no", and shake their heads left to right to indicate "yes". 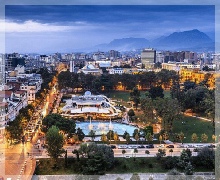 Lively, colourful Tirana is the beating heart of Albania, where this nation's hopes and dreams coalesce into a vibrant whirl of traffic and unfettered fun. 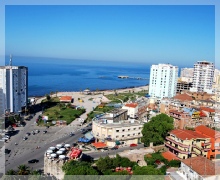 Durres is the second largest city in Albania, after Tirana and it is one of the most economically important as the biggest port city. 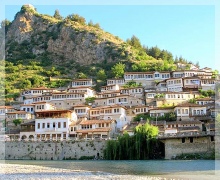 A highlight of any trip to Albania is a visit to beautiful Berat. Its most striking feature is the collection of white Ottoman houses climbing up the hill. 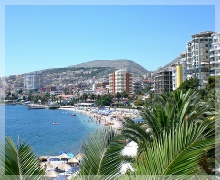 Saranda has grown rapidly in the past decade; skeletal high-rises crowd around its horseshoe shape are being built in the outlying region.

Want to book hotel in Albania yourself ? You can do that on special prices, using our hotel reservation system.