Geography: it has two geographical units: bigger Bosnian part on north, and Herzegovina at the south. The country is mostly mountainous. The northeastern part reaches Pannonia plain, while the south borders Adriatic sea. The country has only 24km of coastline in the town of Neum. Specific situation about this is that Neum is surrounded by Croatian peninsulas, but according to international laws, Bosnia and Herzegovina has a right of passage to the outer sea.

History: The Bosnian state was first mentioned in Byzantine sources in the early tenth century as one of the polities that had emerged from Slav settlements on the territory of the Roman Empire. The mediaeval Bosnian state reached its high point in the fourteenth century, but in the following century it was incorporated into the expanding Ottoman Empire, within which it survived as a distinct administrative unit. Bosnia-Herzegovina remained a separate province also after being first occupied (1878), then annexed (1908), by Austro-Hungary. After World War I it was included within the newly created kingdom of Yugoslavia; after World War II, as the Socialist Republic of Bosnia-Herzegovina, it became one of the eight constituent federal units within the second (Communist) Yugoslavia. With the dissolution of the Yugoslav Federation, confirmed by the EU's Commission, Bosnia-Herzegovina sought international recognition, which it achieved on 6 April 1992 following an internationally supervised referendum in which the great majority of its population voted in favor of independence.

Climate: in the southern part there is sunny and dry weather, with very mild winters. In the more continental areas the weather is similar to that of central Europe – hot summers, cool springs and autumns, and cold winters with considerable snowfall. The Mediterranean and continental climates meet in the middle, creating one of the most diverse eco-systems in Europe. The mountains create a climate of their own. The Alpine climate rules the mountain terrains of the high Dinarics above 1700 meters. The winters there are extremely cold, with temperatures well below zero for more than six months of the year.

Cuisine: Bosnian cuisine can be defined such as combination of the western and eastern influences, but the most strong influence comes from Ottoman Empire which ruled on these territory for more than 500 years. In Bosnia and Herzegovina only the Christian world eats pork. The meat dominates in dishes, mostly lamb, beef, veal. The most famous dish are cevapcici with onion. Bosnians are also known for making a lot kind of pies. Specialty among them is burek, a traditionally made pie with meat, which goes great with yogurt. The best local wines come from Herzegovina where the climate is suitable for growing grapes. Plum or apple rakija is produced in Bosnia.

Interesting facts: Bosnia and Herzegovina also “has” pyramids. The "Bosnian Pyramids" were allegedly found in Visoko. The idea of pyramids in Visoko came from the theory of pseudo-explorer Semir Osmanagic, who claimed that not far from the town of Visoko there were pyramids built by human hands in the past. According to the same theory, the largest pyramid, Pyramid of the Sun (and the first of its kind in Europe), was situated on Visocica Hill, while the Pyramid of the Moon was on Pljesevica Hill. Researchers have tried to prove this theory since April 2006. The theory has been rejected by both domestic and foreign experts in the fields of history and archeology. 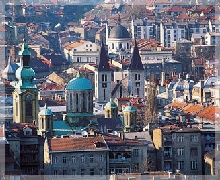 In the 1990s Sarajevo was on the edge of annihilation. Today it's a vibrant yet very human city, notable for its attractive East-meets-West ambience. 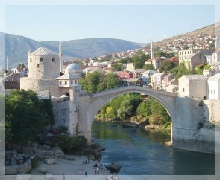 The the Balkans' most celebrated Stari Most (Old Bridge) is the indisputable visual focus that gives Mostar its special magic. 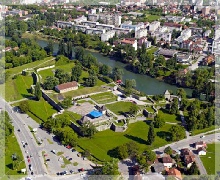 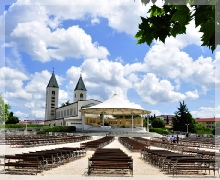 On 24 June 1981 a vision appeared to six local teenagers in Međugorje. What they believe they saw was a manifestation of the Holy Virgin.

Want to book hotel in Bosnia & Herzegovina yourself ? You can do that on special prices, using our hotel reservation system.