The Greek capital has some of the most iconic architecture in the world and nothing betters taking in a view of the city from the Acropolis. Children and adults alike will be amazed at how a wander through Athens’ streets can bring the history books to life; take in Pericles’ Parthenon with the adjacent Temple of Athena Nike and don’t miss the colossal Theatre of Dionysus. With its warm climate, an Athens city break is perfect at any time of year, though it is particularly wonderful in the milder days of spring and autumn. 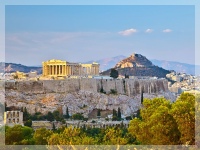 Visitors to Athens will discover immediately that the best way to see the sights of the city is to go on foot. Many of the city’s most popular attractions are located within a comfortable walking distance from each other.

Learn about the enthralling history of Athens with a visit to the National Archaeological Museum and walk around the Panathenaic Stadium which dates as far back as 330BCE and was where the first modern Olympic Games was held 1896. Not forgetting the stunning Acropolis which shouldn’t be missed.

Take time out from the city and admire the nearby enchantments of the Greek coastline. Athens has some stunning beaches locally with sparkling blue waters and tranquil sands. If you’re looking for a calm and quiet beach visit try the private sands found to the south-east of Athens in Glyfada. 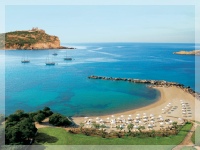 To the north-east of Athens the beaches are more alive with locals and tourist, making them great if you want to be part of the buzzing holiday atmosphere! The best way to discover the beaches surrounding Athens is to hop on a bus and get off when you see a beach that takes your fancy. 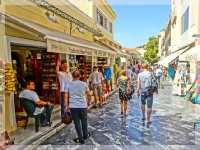 After taking in the ancient charms of Anthens, nearby neighbourhoods will offer you a delightful traditional Greek experience. Plaka is home to many delightful tavernas, cafes and restaurants alongside some beautiful Greek churches.

For some up-market Greek cuisine, try the area of Kolonaki which also houses some incredible boutiques and popular nightspots.

TOP 7 THINGS TO VISIT IN ATHENS

Want to book hotel in Athens yourself? You can do that on special prices, using our hotel reservation system.