As a consequence of long and rich history of Dubrovnik, every stone tells a story in Dubrovnik. We are here to show you the most interesting Dubrovnik stones and make your visit to Dubrovnik the best time of your life. 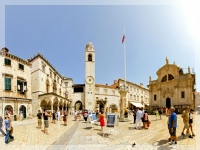 Dubrovnik is a one-town tourist industry on its own. As stunning as the clear blue sea around it, the former centre of the independent Republic of Ragusa invites superlatives and attracts the lion’s share of year-round visitors. When a foreigner thinks of Croatia, he thinks of Dubrovnik’s proud, pristine fortifications set on an azure background.

Dubrovnik has the cream of Croatia’s five-star hotels and attracts the most notable celebrities. With the opening of the cablecar to Mount Srđ and continuing talk of a golf course, Dubrovnik is expanding its attractions beyond the Old Town.

Although the shelling of Dubrovnik in 1991 horrified the world, the city has bounced back with characteristic vigour to enchant visitors again. Take the revamped cable car up to Mt Srđ. Marvel at the Mediterranean lifestyle and the interplay of light and stone. 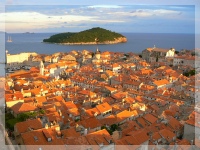 Trace the rise and fall of Dubrovnik in museums replete with art and artefacts. Exhaust yourself retracing history, then plunge into the azure sea. 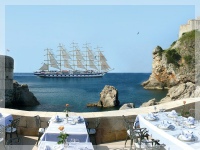 The choice of fish and seafood in Dubrovnik is as fine as anywhere in the Adriatic, with the waters around Mljet and the Elaphite Islands particularly rich in squid, lobster and shells. Oysters from nearby Ston also feature heavily on local restaurant menus.

Among the dishes associated with Dubrovnik in particular are Šporki makaruli (“dirty macaroni”), tubular pasta served with a goulash sauce; and rozata, a vanilla-flavoured custard dessert similar to crème caramel.

The vineyards of the Konavle produce respectable red wines of the Merlot, Cabernet Sauvignon and Plavac varieties, as well as Kadarun, an autochthonous light and fruity rosé.

Want to book hotel in Dubrovnik yourself? You can do that on special prices, using our hotel reservation system.