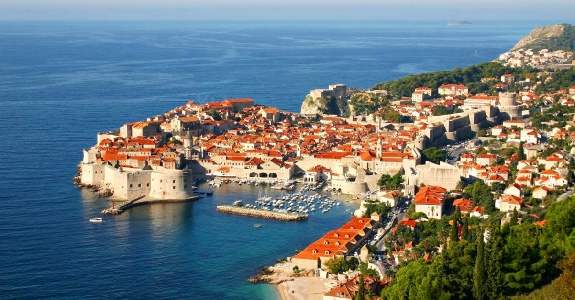 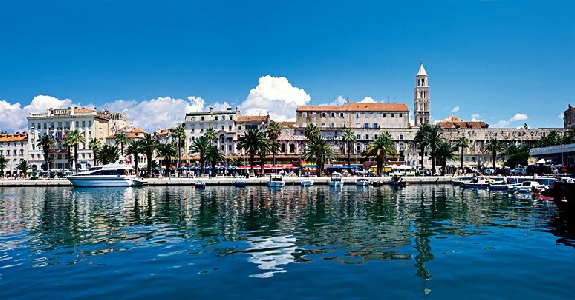 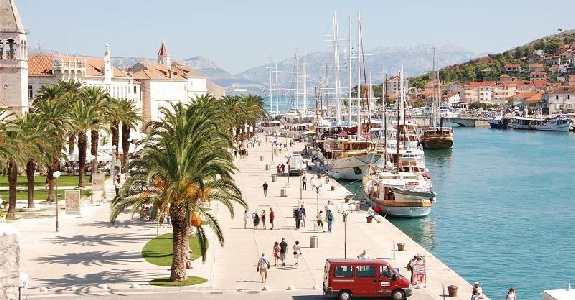 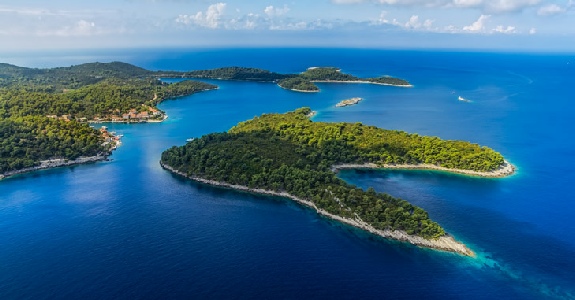 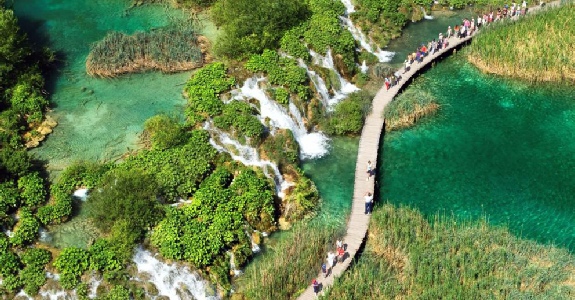 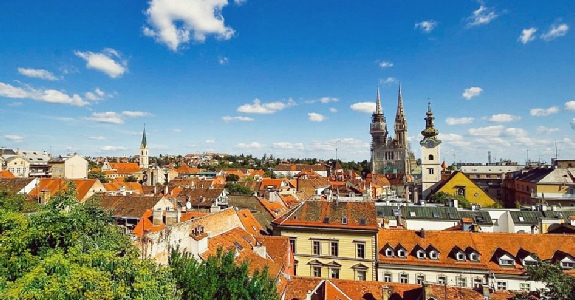 If you want to go on the tour, where beautifulness and historical and cultural importance of the sights visited is guaranteed, than this is the right tour for you. The Croatian coastline has the second largest number of islands and is the most indented in Mediterranean.

Arrival at Dubrovnik airport. Meet & greet followed by a private transfer to your hotel. Free evening and overnight at the hotel in Dubrovnik.

Guided halfday tour of the Old City included in UNESCO World Heritage Site list (since 1979). This ancient city surrounded by ramparts and fortresses abounds in architectural and cultural masterpieces carefully preserved for centuries. A pleasant walk will take you to the Rector.s Palace and the Dominican Monastery housing a rich collection of medieval paintings. Following the central city street Stradun you will have a chance to visit the Franciscan Monastery and other intriguing sites.

Morning at leisure in Dubrovnik. Departure towards Split with enroute stop in the town of Ston built in the 14th century in the form of a twofold fortification system with Large and Small Ston, aiming to protect the salt plants, one of its major economic resources. A 12 kilometer long wall the world.s second longest wall after the Wall of Chinaconnects two fortified cities: the first was built in order to protect the salt plants and the second as the salt export harbor. In Croatian Gastronomy the Ston Bay is the cradle of farming of mussels and oysters. Arrival Split. Accommodation at the hotel and overnight. .

Your guide will meet you in hotel. Split is the largest and most important town in Dalmatia. Walking tour of historical center and remains of Diocletian's Palace (UNESCO World Heritage List since 1979), built between the late 3rd and the early 4th centuries A.D. Afternoon is reserved for visit to Trogir, a town museum. Lovers of cultural and historical monuments, art, architecture and nice alleys are given the opportunity to learn about manifold and complex heritage from Romanesque yard to the modern interiors. The unique historical core Radovan.s portal has been arousing excitement among visitors and travelers for centuries. Overnight at the hotel in Split.

Breakfast buffet followed by check out and departure to Zadar with enroute stop in Primosten. The enchanting peninsula of Primosten is one of the most photogenic spots on the Adriatic coast. There are no particular sights or museums in Primosten but the old medieval town is a museum itself. Arrival to Zadar. Walking tour of this ancient Croatian city which inherited architectural sights from long and turbulent history as a church of St Donat, originally built in 9th century in Byzantine style. The main city street The Wide Street or Kalelarga, together with modern architectural solutions of Sea Organ and Greeting to the Sun are unique in the world.

Breakfast buffet at the hotel followed by check out and departure towards Plitvice Lakes National Park one of the greatest natural wonders and phenomena in the world. Connected to each other by a series of foaming cascades and thundering waterfalls, the lakes are fed by many rivers and streams. Plitvice Lakes were declared a National Park in 1949, and since 1979 they have been on UNESCO list of World Natural Heritage. Continue to Opatija. Accommodation at the hotel and overnight in Opatija.

Breakfast at the hotel, followed by a full day Istria Peninsula Tour. The first stop is in Hum officially the smallest town in the world with 22 inhabitants. Following the Mirna river valley we will reach the village of Livade and Motovun, located on the very peak of a hill with a magnificent view over the valley and surrounding hills. Groznjan and Motovun regions are famous for truffles, as well as the best white wines of Croatia. The road will lead us further to Porec for a walking tour and a visit to the ancient Euphrasius basilica the sine qua none of religious architecture with outstanding Byzantine mosaics from the 5th century, and further to Rovinj the Jewel of Istria.

Morning at leisure in Opatija. The city, owes its name to the Benedictine Abbey which was built in the 15th century, on the sea shore. A pearl of AustroHungarian Riviera was the favorite tourist destination of the European high society, emperors, famous artists and celebrities such as Wilhelm II, Franz Joseph, Empress Sissy, Gustav Mahler, Isidora Duncan, Anton Pavlovich Chekhov and many others. Departure to Zagreb. Overnight at hotel in Zagreb.

Morning is reserved for Lower Town guided walking tour. Zrinjevac Park together with a lot of buildings representing the typical architecture of Central Europe from the edge of 19th and 20th century. Continue by the Botanical Gardens and Marulic Square towards the Marsal Tito Square with another three important landmarks of Zagreb: The Mimara Museum, Croatian National Theatre and Zagreb University. Afternoon starts with a short funicular ride to Upper Town totally different, enchanting Zagreb and the story returns back to 15th and 16th century. St. Mark's Square with Houses of Parliament and Government and St. Mark's Church with its picturesque roof, The Stone Gate another remaining of strong city walls are impressive sights for your own postcard of Zagreb. Overnight at hotel in Zagreb.

Breakfast at the hotel followed by check out and transfer to Zagreb airport for outbound flight.

The 'Pearl of the Adriatic', on the Dalmatian coast, was an important Mediterranean sea power from the 13th century onwards. Although severely damaged by an earthquake in 1667, Dubrovnik managed to preserve its beautiful Gothic, Renaissance and Baroque churches, monasteries, palaces and fountains. Dubrovnik was founded in the first half of the 7th century by a group of refugees from Epidaurum, who established their settlement at the island and named it Laus.

Ston and its smaller neighbor, aptly named Mali Ston (Little Ston), are completely connected and surrounded by a five-kilometer defensive wall. Situated on the Dalmatian coast, the walls and fortified port resemble the more famous Dubrovnik harbor, only 60 kilometers to the south. However, the walls of Ston are twice as long as those of the more-acclaimed Dubrovnik and make up the longest fortress system in Europe.

Trogir is an excellent example of a medieval town built on and conforming with the layout of a Hellenistic and Roman city that has conserved its urban fabric to an exceptional degree and with the minimum of modern interventions, in which the trajectory of social and cultural development is clearly visible in every aspect of the townscape.  Its beautiful Romanesque churches are complemented by the outstanding Renaissance and Baroque buildings from the Venetian period.

Plitvice Lakes National Park contains a series of beautiful lakes, caves and waterfalls. These have been formed by processes typical of karst landscapes such as the deposition of travertine barriers, creating natural dams. These geological processes continue today.

There are 16 interlinked lakes between Mala Kapela Mountain and Pljesevica Mountain.

Buildings of completely different styles have been erected in this popular tourist resort throughout history. Discover for yourself why Opatija has been one of the most popular destinations for sightseeing in Croatia since the 19th century when the Habsburgs turned it into one of Europe’s most popular destinations where nobles and aristocrats enjoyed in moments of peace and quiet far from their courts and daily politics.

Opatija’s rich history and picturesque surroundings should not be missed. 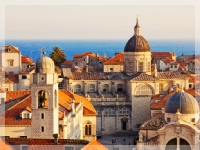 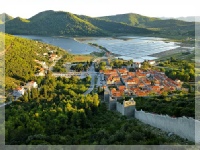 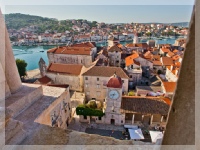 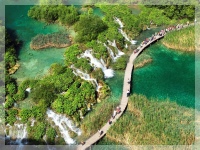 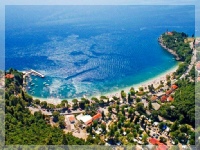