General fact: Republic of Slovenia is middle European country, with population of two million inhabitants, and total area 20,273 km2. It borders Italy to the west, Austria to the north, Croatia to the south and southeast and Hungary to the northeast. It is a parliamentary republic and a member of the European Union and NATO. Its capital and largest city is Ljubljana. It is the country of diversity, it lies at the crossroads of the Alps, the Mediterranean, the Pannonia Plain, and the Dinaric Mountain Range. This diversity is best presented through the traditional regions of the country: Gorenjska (Upper Carniola), Dolenjska (Lower Carniola), Notranjska (Inner Carniola), Primorska (Littoral Region), Štajerska (Styria), Koroška (Carinthia) and Prekmurje (Over-Mura Region). The official language in Slovenia is Slovene, which is a member of the South Slavic language group. In 2207. Regarding the knowledge of foreign languages, Slovenia is ranked among the top European countries. The most spoken foreign language is English. As of 2007, 92% of the population between the age of 25 and 64 spoke at least one foreign language and around 71.8% of them spoke at least two foreign languages, which was the highest percentage in the European Union. Time zone GMT plus one hour in winter and GMT plus two in summer.

Climate: The weather in Slovenia varies from season to season. There are also three climatic influences that meet in the country. A harsh Alpine climate prevails in the mountains, the coast has a sub-Mediterranean climate, and the north-east lowlands have a continental climate. The average temperature is above 20°C in July, and around 0°C in January.

History: As late as the 20th century Slovenia was still being ruled by foreigners, mostly the Habsburg monarchy of Austro-Hungary. The Slovene people nevertheless succeeded in forging a collective consciousness and national allegiance. Slovenia became part of the Kingdom of Yugoslavia after the First World War, then part of the Socialist Federal Republic of Yugoslavia after the Second World War. After more than 70 years of living inside Yugoslavia, almost 90% of voters opted for independence in the referendum held in 1990 after which Slovenia has its independence since the crash of Yugoslavia at 1991. Slovenia joined the European Union in 2004, and also became a member of Nato. It was the first of the new EU members to join the euro, in 2007.

Seashore: Slovenia has small shore, but very beautiful. Slovenian part of the Adriatic coast is 46 kilometers long, and it is the nearest to Central Europe. Standard hotel, cuisine, entertainment, a variety of events and tourist infrastructure are among the best in the Adriatic area and are comparable to the best tourist destinations in Europe. The most attractive towns on  the seashore are: Izola, Koper, Piran, Portorož.

Nature: The most landscapes in Slovenia are covered with forests. Green is the country's dominant color, thanks to its extensive forests and other areas of greenery. Because there are few countries in the world that are so green, and because Slovenia wants to conserve its nature for future generations, green tourism is being developed. The peak of beautiful sceneries is Triglav national park.

Cuisine: The Slovenia cuisine is mix of different cultures from neighborhood and it bears diversity of Slovenian landscape, climate and history. There are noticeable influences from the cuisines of the Mediterranean, the Pannonia plain, the Alps and the Balkans. Special part in offer are Slovenian wines which can satisfied and most demanding tourists.

Interesting facts: Slovenia is the only former communist state to be a member of the European Union, the Eurozone, the Schengen area, the Organization for Security and Co-operation in Europe, the Council of Europe and NATO at the same time. 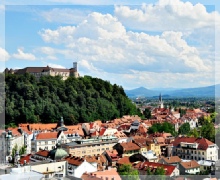 With a dazzling hilltop castle as her crown and the emerald-green Ljubljanica River at her feet, Ljubljana is a princess in size (petite). 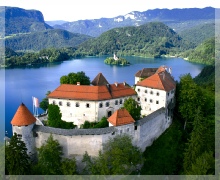 With its emerald-green lake, picture-postcard church on an islet, a medieval castle clinging to a rocky cliff and some of the highest peaks. 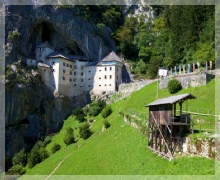 This is one region of Slovenia that you cannot get to know merely superficially. Literally. The beauties that lie hidden below are even more astonishing. 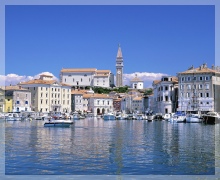 Picturesque Piran (Pirano in Italian), sitting at the tip of a narrow peninsula, is everyone’s favourite town on the Slovenian coast.

Want to book hotel in Slovenia yourself? You can do that on special prices, using our hotel reservation system.